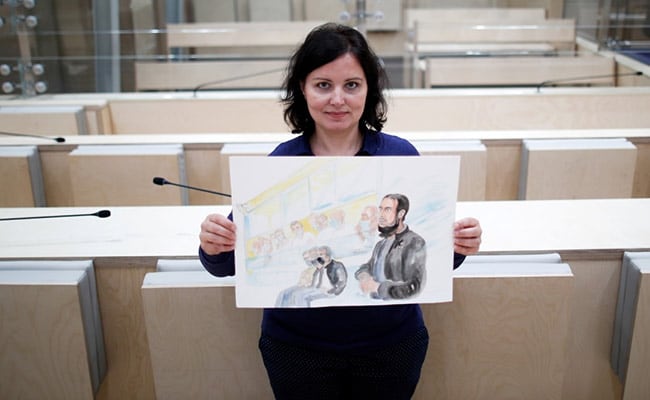 French court artist Elisabeth de Pourquery stared intently into the eyes of the self-avowed Islamic State terrorist and fixed an image she would capture for posterity.

Separated by a glass screen, she sat just a few feet from Salah Abdeslam, suspected of being the lone surviving member of a commando of suicide bombers and gunmen who killed 130 people in a series of coordinated attacks on Paris in November, 2015.

“What’s important is his aura and his eyes, those deep, round eyes,” de Pourquery told Reuters in her studio.

“You have this gaze that is very deep, and very intense, which clearly shows a lot of fear. And that’s what you need to recreate with the paintbrush.”

When Abdeslam removed his black mask during the first day of the trial and defiantly declared himself to be a soldier of Islamic State, de Pourquery made rapid strokes with her watercolour brush.

Close enough to see the slightest expression etched on Abdeslam’s face, de Pourquery described the calculated demeanour of the 31-year-old who expressed no remorse for the violence that November night six years earlier.

“You could hear the tone of his voice. It was reasoned, thought through,” de Pourquery continued. “And it was bordering on icy.”

Now three weeks into the trial, the artist and the defendant were each becoming accustomed to the presence of the other, with the French-Moroccan nodding at her at the start of each hearing, she said.

De Pourquery said she had sketched 150 trials, including that of the Islamic terrorists who attacked the satirical magazine Charlie Hebdo in early 2015.

The court sessions can last up to 10 hours each day, during which de Pourquery will sketch as many as seven drawings for TV news bulletins.

It can be gruelling, emotional work, hunched in the same position for hours, focused on the emerging sketch but wary of missing a brief moment that defines the day’s hearing.

“It’s good to switch off and paint something else, a pretty watercolour, the sea, the beach, something that has nothing to do with the trial,” she said.