India may reach 40% of China’s economic output by 2030. (Representational)

China is closing in on the US as the most powerful country influencing the Asia-Pacific, as America’s handling of the Covid-19 pandemic tarnishes its reputation, a study showed.

While America retained its place as the region’s top superpower, its 10-point lead on China two years ago has been halved, according to the Sydney-based Lowy Institute’s Asia Power Index for 2020, which ranks 26 nations and territories.

The US “lost prestige” due to its poor response to the pandemic, multiple trade disputes and President Donald Trump’s moves to withdraw from multilateral deals and agencies, according to Herve Lemahieu, the study’s research chief and director of Lowy’s Asian Power and Diplomacy Program.

“The pandemic was a game changer,” he said in a phone interview. “It contributed to a double whammy of problems for the U.S. because on the one hand, its poor handling of the Covid-19 crisis has resulted in a diminished reputation. And on the other hand, obviously it will take many more years to recover from the economic fallout of the pandemic.” 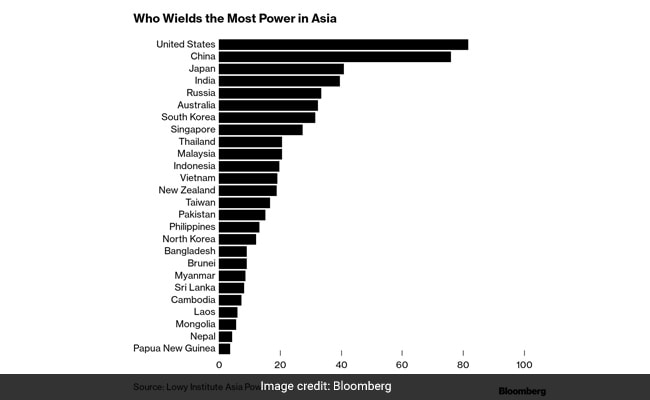 The US economy could take until 2024 to recover to pre-pandemic levels, the institute said. In contrast, China’s economy has rebounded from the virus and is the only large economy forecast to recover in 2020. This could give it an advantage against neighbors over the next decade.

China stayed firmly in second place for the third year running, despite seeing a “notable fall” in diplomatic clout after facing accusations of withholding information about the severity of the Wuhan outbreak. Lemahieu also cited wolf warrior diplomacy – more aggressive rhetoric and actions from Beijing’s envoys – contributing to that drop.

A Trump re-election in November would bring “more of the same” trends, he said. However, China would find it hard to replace the US and become the region’s uncontested dominant power.

“I think it’s more likely that China will eventually level with the United States and may, toward the end of this decade, even surpass the United States. But not meaningfully enough to pull ahead by substantial margins,” said Lemahieu.

India, the fourth most powerful nation on the index after Japan, lost economic growth potential in the pandemic and is also ceding strategic ground to Beijing. Lowy projects India will reach 40% of China’s economic output by 2030, compared with the 50% estimate last year.

“It’s certainly delayed India’s arrival as the great power in the region,” said Lemahieu. “And it also means that India will be quite distracted by the development challenges and by the new poverty rate, with more newly impoverished people in South Asia.”

As many as 347.4 million people in the Asia-Pacific region could fall below the $5.5 a day poverty line because of the pandemic, according to the United Nations University World Institute for Development Economics Research.

Overall, Asia’s economy, which was poised to become larger than the rest of the world economy combined in 2020, now faces “a perfect storm of public health, economic and strategic challenges” due to the pandemic, the Lowy report said. 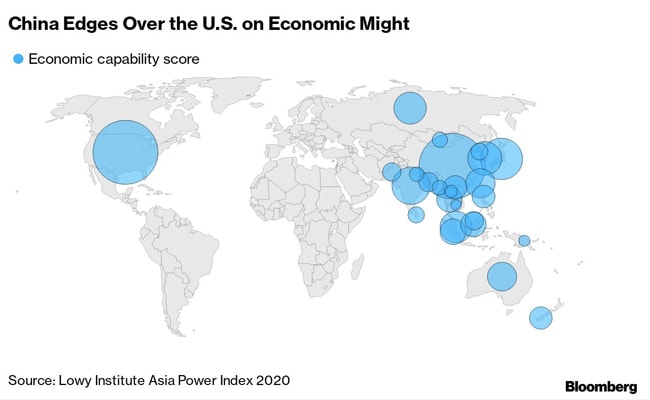 Third-placed Japan, described in the report as a “smart power” for using limited resources to wield broad influence in the region, gained the most points in terms of its defense diplomacy – which spans a country’s defense dialogues to joint military exercises and procurement of arms – overtaking South Korea on this measure.

Russia, Australia, South Korea, Singapore, Thailand and Malaysia round out the top 10. Southeast Asian nations on the list have been gripped with political turbulence, yet have managed to keep virus spikes in hand despite limited resources, Lemahieu said.

Taiwan was among the few places to gain relative power this year, alongside Australia and Vietnam. Taiwan in particular improved its diplomatic influence score this year, after setbacks in 2019 when a handful of allies cut official ties as Beijing sought to isolate the island on the world stage.

Australia climbed by one spot to 6th, overtaking South Korea. The country gained points in cultural and diplomatic influence due to favorable perceptions of its domestic response to the virus, with daily infections slowing to a trickle. It also boosted its economic relationships score after this year securing its 14th free-trade deal, with neighbor Indonesia.

Apart from the US, Russia and Malaysia posted the biggest losses on the index.

UK Pets Will Need Certificate To Enter EU After Brexit