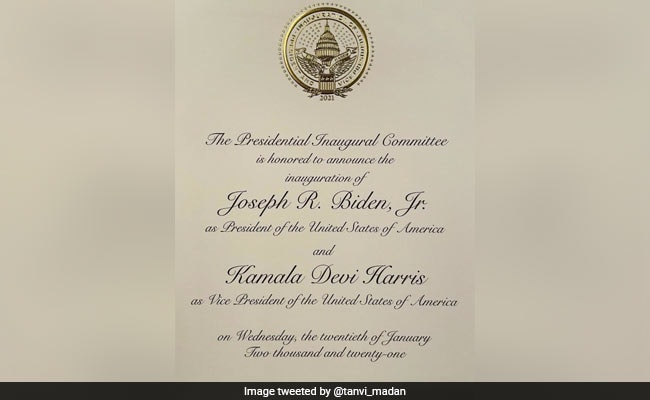 There’s little to remark about the beige card with black text, except for what it announces: The inauguration of the United States’ first female Vice President.

Social media users, especially in India, celebrated for the momentous occasion, gushing over the invitation card bearing the names of Joe Biden and Kamala Harris.

Kamala Devi Harris… the sheer joy to read this invitation card. Wishing the President and VP a successful innings at the helm. Congratulations America! pic.twitter.com/dB1Cv3juwm

Having spent most of my life in either Delhi or DC, I can be quite jaded. But then there are the moments that are really striking — seeing a name like “Kamala Devi” on such an announcement is one of them. pic.twitter.com/jd8GGoZRe9

Kamala Devi Harris – I know she is a whole lot more American than Indian but heart feels what heart feels.

Here’s to that immigrant who flew all the way across oceans, built a life, brought up two amazing daughters- & one of them went onto become VP of that country.#Believe ❤️

Biden, 78, will take the oath of office as the 46th President of the United States while Harris, 56, will be sworn in as the 49th US Vice President.

Over 25,000 National Guard troops are guarding the venue and nearby areas to ensure that the nation’s transfer of power can take place peacefully.

Biden, who is set to be the oldest president in American history, will succeed President Donald Trump, 74, who has decided not to attend the swearing-in ceremony. Harris will take over the office of the US Vice President from 61-year-old Mike Pence.

Kamala Harris, the daughter of an Indian immigrant from Chennai, will create history by becoming the first-ever woman Vice President of the United States. She would also be the first female, first Black and first South Asian American vice president.

Her husband Douglas Emhoff, 56, will be the first ‘Second Gentleman” – the first male spouse of a vice president in the US.

Harris will be sworn in on two Bibles – one that belonged to a close family friend named Regina Shelton and another that belonged to Thurgood Marshall – the country”s first African American Supreme Court justice.

Wuhan Marks A Year Since Lockdown As Biden Warns Of 6,00,000 Dead

Heavily Armed Man Arrested At Security Checkpoint Near US Capitol