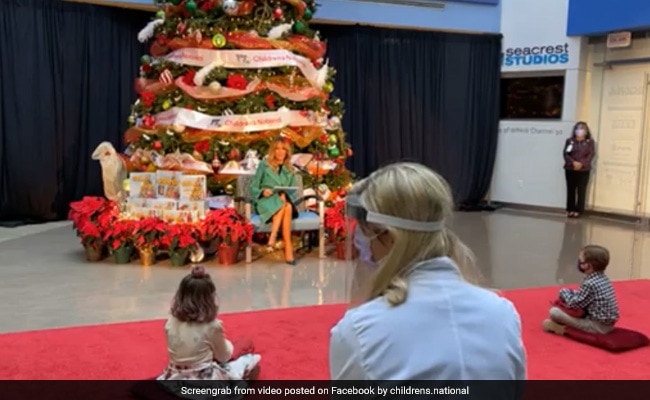 According to CNN, the First Lady did not comment on why she removed her mask.

US First Lady Melania Trump on Tuesday violated the stated mask policy at Children’s National Hospital as she removed her mask to read a holiday book to children.

According to a CNN report, the first lady arrived in the hospital’s main atrium wearing a mask but when she took her seat in front of a tree, she removed the mask.

According to the hospital policy, “Everyone must wear a mask at all times while in any Children’s National facility to prevent the spread of COVID-19, including wearing a mask when entering any Children’s National building, as mandated by area officials. This includes all public places, such as the hallway and cafeteria and wearing a mask at all times when you are around other individuals.”

According to CNN, the First Lady did not comment on why she removed her mask and if she had received special permission to do so.

Diana Troese, Children’s National spokeswoman, citing the Washington, DC, health regulators, said, “Our number one priority at Children’s National Hospital is the safety of our patients, families and employees. Under DC Health regulations, wearing a mask is not required when a person is giving a speech for broadcast or an audience, provided no one is within six feet of the speaker.”

“In the case of today’s visit which was broadcast to our 325 patients, while the First Lady did remove her mask while she read a story, she was more than 12 feet away from others in our large atrium. All other people in that space were wearing masks. The remainder of her visit, she wore a mask,” she added.

China Denies US’ Allegation That Coronavirus Originated From Wuhan Lab