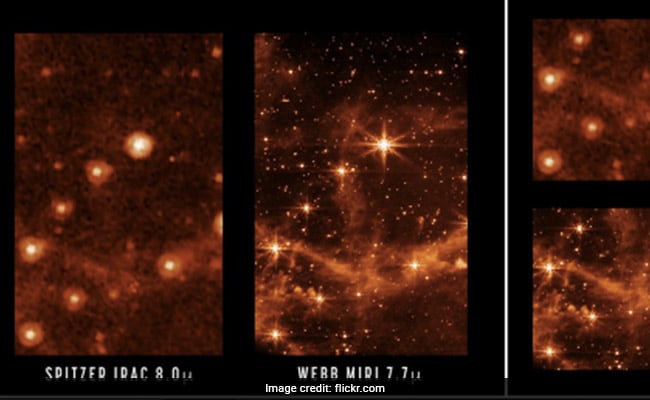 The James Webb Space Telescope has captured some stunning images of Milky Way.

The James Webb Space Telescope, which will soon replace Hubble, has captured some stunning images of a neighboring satellite galaxy of our Milky Way, according to American space agency NASA (National Aeronautics and Space Administration). The photos, captured by the telescope when it was undergoing testing, has been shared on Twitter by NASA.

According to the post, when compared to photographs collected by NASA’s previous infrared observatory, the Spitzer Space Telescope, the results are spectacular. The Webb telescope has larger primary mirror and improved detectors to see the infrared sky with even more clarity.

The images are taken by the telescope’s MIRI (Mid Infrared Instrument), that features light from polycyclic aromatic hydrocarbons. These carbon and hydrogen molecules help scientists better understand about the interstellar gases.

The post, shared on Monday, has received over 8,300 likes so far.

The James Webb Telescope will replace Hubble as NASA’s flagship astrophysics mission once it is operational, which is scheduled around the end of June 2022.

This telescope is an infrared astronomy space telescope. Its considerably increased infrared resolution and sensitivity will enable it to view objects too old, far, and dim for the Hubble.

The new telescope’s primary mirror is made up of 18 hexagonal gold-plated beryllium mirror segments that together form a 6.5-meter (21-foot) diameter mirror, compared to Hubble’s 2.4 m. (7.9 ft). The Webb telescope has a light-collecting area of around 25 square metres, which is roughly 6 times that of Hubble.

It was launched by NASA in December 2021 from Kourou, French Guiana.