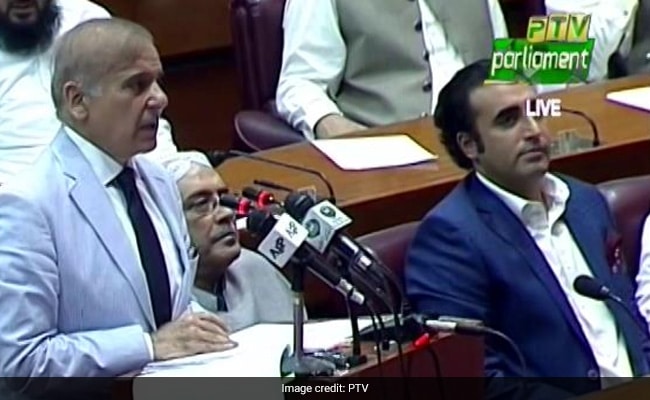 Shehbaz Sharif said he’ll resign if there is any evidence to prove Imran Khan’s allegation.

Shortly after being elected as Pakistan’s Prime Minister, Shehbaz Sharif on Monday in his inaugural speech at the National Assembly announced a parliamentary probe into the “foreign conspiracy” to topple Imran Khan’s government and offered to resign if there is a shred of evidence to prove the allegation.

“As the elected Prime Minister, I announce that a briefing be given to the security committee of the National Assembly on-camera in which Army leadership, DG-ISI, Foreign Secretary and the diplomat who wrote the ‘letter’ is present,” Mr Sharif said, adding that, “We should not delay it as the entire country should know.”

He further said that he would resign from his position if even a shred of evidence is found proving the “foreign conspiracy” allegations.

“I say it on behalf of all our members that I will resign if a shred of evidence is found that it was a foreign conspiracy, that we got support from a foreign power, if our involvement is proved anywhere, I say it with you as witness Mr Speaker that I will resign that very second and go home,” Mr Sharif said.

Imran Khan had accused the US of interfering in Pakistan’s politics and plotting to oust his regime citing an alleged “threat letter” that was sent to Pakistan, carrying the exchanges between Pakistani diplomats and US officials.

Mr Sharif, at the beginning of his speech, said, “Today’s day is an important day for all Pakistanis, as today the people have shown a ‘selected’ Prime Minister the way back home by the way of constitution and law.”

“Today, the almighty has saved Pakistan and the 22 crore people of the country. This is the first time when the vote of no-confidence motion was successfully passed. The people of this country will celebrate this day,” Mr Sharif further said.

He also talked about the historic Supreme Court judgement of April 7, saying that the rejection of the “doctrine of necessity” by the Pakistan Supreme Court should be commemorated every year.

“No one in future will be able to use the ‘doctrine of necessity’ in future,” Mr Sharif said.

Pakistan’s Supreme Court in a historic judgement on Thursday had called for the convening of the session of the National Assembly “not later than 10:30 AM on Saturday” after setting aside the April 3 ruling of the Deputy Speaker Qasim Khan Suri against the no-confidence motion on “Constitutional grounds”.

Declaring the ruling of the Deputy Speaker “to be contrary to the Constitution and the law and of no legal effect”, the Court set aside all the subsequent steps taken, including the dissolution of the National Assembly, while also restoring Prime Minister Imran Khan and all the Federal Ministers to their respective positions as of April 3.

The court also fixed the Saturday session with the conditions that the session cannot be prorogued unless the motion is voted upon, and in case Imran Khan loses the no-trust vote, the next PM had to be elected in the same session.

Shehbaz Sharif, President of Pakistan Muslim League-Nawaz (PML-N) and former leader of the Opposition, was elected the 23rd Prime Minister of Pakistan by the National Assembly of the country on Monday.

The younger brother of former Prime Minister Nawaz Sharif was set to grab the top post after Imran Khan-led PTI government was ousted from power following the no-confidence motion against the regime.