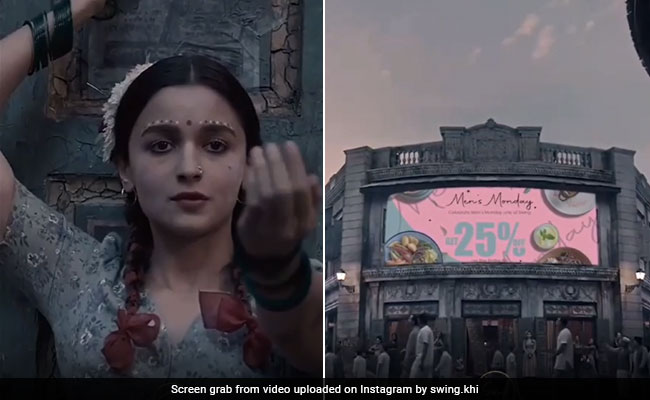 “Aaja na Raja – what are you waiting for?” the tagline of the ad read.

A restaurant in Pakistan has drawn flak on social media for using a scene from the Bollywood movie Gangubai Kathiawadi featuring Alia Bhatt in order to promote an offer only for men.

In the film, Alia Bhatt plays the role of prostitute Gangubai who goes on to become an influential brothel owner. The advertisement used by the restaurant in Karachi showed a scene from the movie where Bhatt gestured to get her first customer. With that poster, the restaurant Swing announced Men’s Monday with a 25% discount for men.

“Aaja na Raja – what are you waiting for?” the tagline of the advertisement said.

The ad showed Bhatt standing at the door and a big billboard promoting 25% off on “Men’s Monday”. “Swings is calling out all the Rajas out there,” read the caption of the post.

After being shared on social media, the ad soon started making the rounds on various internet platforms. Several users said that the advertisement was in bad taste and asked it to be taken down.

“You really need to look into what’s being put up here. To use a painful scene to justify whatever you’re offering is reeking of misogyny, ignorance,” wrote one user. “What a cheap marketing,” added another.

A third user said, “If you guys think that this is some sort of marketing strategy and this will gain you some attention and customers then you’re sadly mistaken! Using a clip from a movie based on prostitution (which btw is based on someone’s real life) just shows how low and shallow you can get just for publicity.”

However, instead of deleting the post, Swing came up with a clarification. The restaurant defended the advertisement and said that it was just a concept and not meant to hurt anyone. “The movie and this post is based on a concept. Like before, we’re open to all and will be serving you with the same love like we always have,” it said.

But despite the uproar on social media, the restaurant said that it was open, and in one of their Instagram stories it also showed that the restaurant was “housefull”.