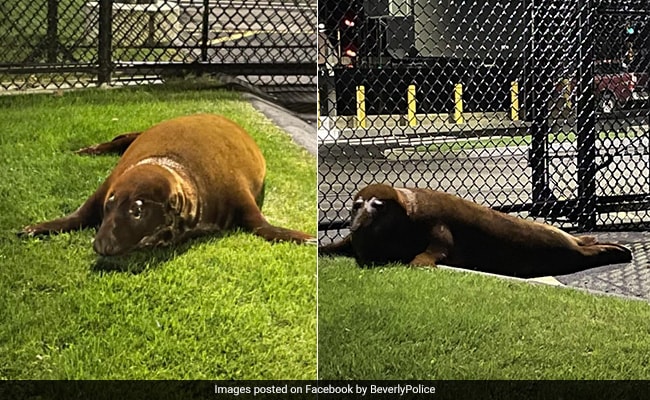 Picture shows the gray seal that turned itself to the local police department.

A gray seal named Shoebert in the United States has become a local attraction in the Beverly city of Massachusetts after getting lost and wandering into a pond in the local area and turning itself to the local police early on Friday morning.

It’s believed that the animal made its way from the sea to the pond through a river and some drainage pipes. Shoebert was rescued by the Beverly Police Department.

The Beverly Police Department shared a post on Facebook on Friday along with the pictures from the rescue operation.

“At approximately 230am on 09/23/22 we had a visit from everyone’s favorite seal Shoebert. Shoebert made his way out of the pond and traveled through the Cummings Center parking lot and came to the side door of the police station for some help,” the department wrote while sharing the post.

According to the post, Shoebert was quickly rescued by the whole overnight shift, Beverly Animal Control, NOAA officials, the International Fund for Animal Welfare, and the Beverly Fire Department. They somehow managed to place Shoebert in a unique wildlife container in the early morning hours. At the time of rescue, it was observed in good health and seemed a bit sassy.

After the rescue, the seal was taken to the Mystic Aquarium in Connecticut in order to be monitored and get any necessary medical treatment before being released into the wild.

“Thank you Shoebert for having faith in the BPD, you will be deeply missed by your friends here. Over the past week you brought a lot of joy and happiness to our city. Feel free to come back and visit anytime,” the post further said.

Since being shared, the post has received more than 3,800 likes and 2,600 shares. Facebook users have flooded the comment section of the post praising the police department for its support while others thanked Shoebert for visiting city’s local area.

“Thank you Shoebert for giving us all a much-needed opportunity to appreciate a non-political event that brought much joy to many! And thank you Beverly Police Dept for your compassion and caring of such a sweet citizen,” wrote one user.

Another said, “Imagine being at work and you see a seal outside your window. Thanks for the update BPD! I’m glad Shoebert is safe!”

Dating Apps And Telegram: How China Protesters Are Defying Authorities