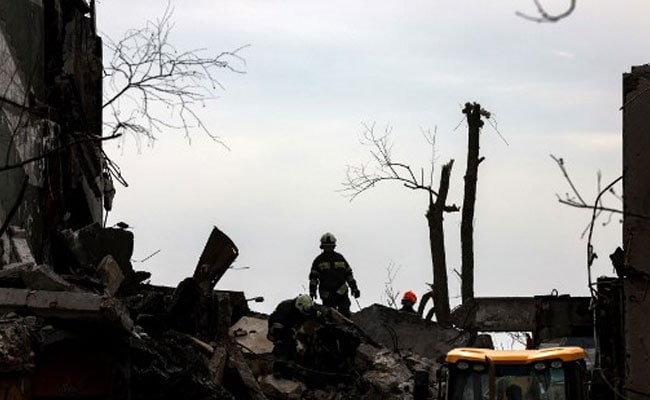 In the small town of Borodyanka, not far from Kyiv, diggers sort through the rubble of houses destroyed by Russian bombardments, looking for the missing.

Her eyes read from tears and lack of sleep, Antonina is watching as one picks through the remains of the building where her son used to live on the third floor.

The slow process is unbearable for the 65-year-old mother, whose own home was spared by the fighting.

There’s a gaping hole in the middle of the five-storey building, where the it was hit by a bomb dropped from a Russian plane on the evening of March 1, a few days after the start of the invasion.

In a few seconds, the ten apartments that used to stand here were turned into a heap of concrete and twisted metal.

“There were people in this building, it was night,” says Antonia, wearing a brown coat and a blue woollen hat.

Antonina sits alone on a chair in the corner of what used to be the building’s garden. She holds a cane in front of her in both hands and rests her head on top, a sad, thoughtful look on her face as she watches the diggers do their work.

“The people who stayed in the two blocks on the sides of the building were hurt but they’re still alive,” she says. “Those that stayed (in the middle section), they’re all dead.”

‘Maybe he is still there’

Antonina has not heard from her son Yuri, 43, since the night the bomb fell.

“Maybe he managed to get out, maybe he is hurt, maybe he is still there (under the rubble). I can’t say, I don’t know,” she says, before bursting into tears.

Scattered in the ruins of the building there’s a pair of shoes, a book, a water-pistol, some cushions, clothes and three stuffed animals, a bear, a giraffe and a hippo, all next to each other.

A mattress is caught in the branches of a tree.

On the ground floor of one of the still-standing blocks, Lyubov Yaremenko’s apartment used to have a little terrace.

With the forecast for rain, she puts a plastic tarp over the brown sofa she’s placed where the patio was.

It is the only piece of furniture she was able to save from her house, where everything else was devastated by the explosion.

Doors came off their hinges, windows smashed, the cupboards were knocked over and clothes thrown everywhere.

When the bomb hit, Lyubov, an olderly lady of around 70, was not in her apartment but in the cellar.

“We stayed so long underground, almost a month and a half, first here, then we ran to the cellar on the other side of the street as they were bombing… I fell and hurt my ribs,” says Lyubov still shocked.

“It seems there was a family with young children in this cellar, that they can’t yet reach,” she says.

The main road in Borodyanka is now nothing more than a near-two-kilometre-long strip of ruins and devastation.

The town, which numbered around 13,000 inhabitants before the war, was retaken by Ukrainian forces at the end of March after the withdrawal of Russian troops from the region around Kyiv.

Ukraine’s president Volodymyr Zelensky warned on Saturday that worse was still being uncovered.

“They have started sorting through the ruins in Borodianka,” northwest of Kyiv, he said. “It is much more horrific there. There are even more victims of Russian occupiers.”

He has said that the situation in Borodyanka is “much more horrific” than in Bucha, where dead civilians were discovered, some of them with their hands tied behind their backs.

Ukraine’s Prosecutor General Iryna Venediktova said on Thursday that 26 bodies had been recovered from two destroyed apartment buildings in Borodyanka so far.

Across from the main square, another, taller building of eight storeys has also seen one third of its mass shorn off by a bomb. A crane is working to remove hulking pieces of its walls, blackened by the explosion.

Two rescue workers in a cherry picker look through the windows of the standing apartments one by one, looking for bodies.

“We would have liked it to be a simple rescue operation but the strikes were end of February, early March,” says Svetlana Vodolaha, an emergency services worker from Kyiv.

“We don’t have an exact figure for the number of people that could still be trapped under the collapsed buildings, but we have to search all of them,” she says.