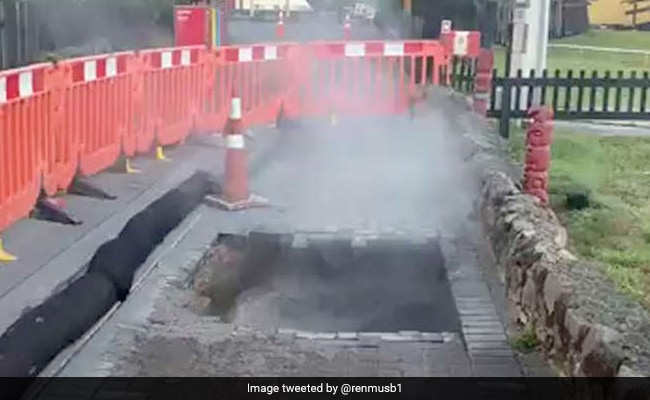 The village will be temporarily closed while an investigation is underway.

An Australian woman recently fell into a geothermal sinkhole that opened up beneath her in a popular tourist village in New Zealand. According to the Guardian, the woman was rushed to a nearby hospital after suffering severe injuries. She was swallowed by a two-metre-wide hole when it opened suddenly on a footpath near the entrance of Whakarewarewa thermal village on Rotorua, in central North Island.

The village’s general manager, Mike Gibbons, told the outlet that the woman’s husband was also injured while trying to help her out of the hole. Then, two guides nearby and a local weaver all ran to assist and collectively managed to get her out of the hole, Gibbons added. She was taken to Rotorua hospital, where she was in serious but stable condition on Friday morning.

Whakarewarewa is a geothermal area located near Taupo Volcanic Zone. The hole was reportedly about 3.3 feet deep and had crumbled open over Fumarole, which is an opening near a volcano that emits hot gasses and steam. These gases reach extreme temperatures, sometimes as hot as 400 degrees Celsius.

Speaking to ABC Australia, a village spokesperson said that the ground may have been compromised following recent heavy rainfall in the area. Separately, a witness told the outlet that the area has been “steaming” for a week but people had still been walking close to it. A cone had also been placed there, however, that did not stop people, the eyewitness added.

Now, the village will be temporarily closed until a full investigation and assessment have been undertaken by New Zealand’s health and safety regulator.

Meanwhile, speaking of sinkholes, recently a house party also turned into a nightmare for guests after a sinkhole opened under the swimming pool and sucked a man down a hole 43 feet deep. This terrifying incident took place in Israel. A video showing the devastation had surfaced online. Local media outlets said a man was injured and another was later discovered dead.