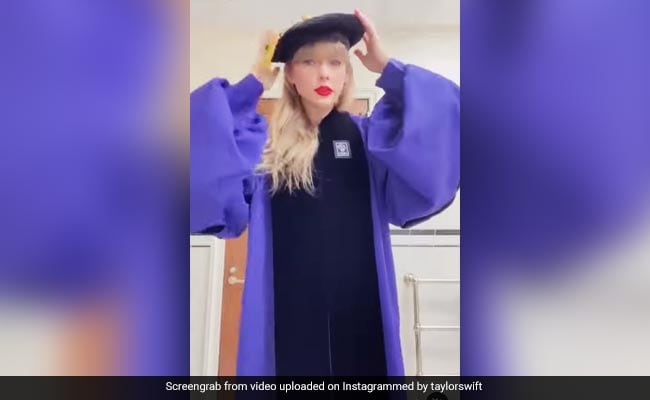 Taylor Swift, an American singer-songwriter, today received an honorary doctorate from the New York University in fine arts. Ms Swift turned up at New York’s Yankee Stadium in a cap, blue gown, and a black dress.

The pop singer also delivered a speech at the 2022 all-school commencement ceremony of the New York University.

She thanked her family and her friends for achieving the feat.

“I know that words are supposed to be my “thing,” but I will never be able to find the words to thank my mom and my dad, and my brother, Austin, for the sacrifices they made every day so that I could go from singing in coffee houses to standing up here with you all today because no words would ever be enough,” Ms Swift said in her speech.

Before heading to the event, Taylor Swift treated her fans with a short video displaying her graduation ensemble. The ‘BlankSpace’ singer posted a video of herself in the graduation attire.

The clip starts with the ‘Love Story’ vocalist gazing outside a car’s window. It then features her putting on leopard print heels, a black sleeveless dress, and an oversized graduation gown on top. She topped off her look with a graduation cap with a yellow tassel and her classic red lipstick.

Taylor Swift started her career with hit singles like the singles ‘Love Story’ and ‘You Belong with Me’. She followed it up with more hits like ‘We Are Never Ever Getting Back Together’, ‘I Knew You Were Trouble’, to name a few.

The megastar is known for hits like ‘Blank Space’ and ‘Shake It Off’. Taylor Swift is a recipient of 11 Grammy Awards, and one Emmy and has featured in Time 100 and the Forbes Celebrity 100 list multiple times.