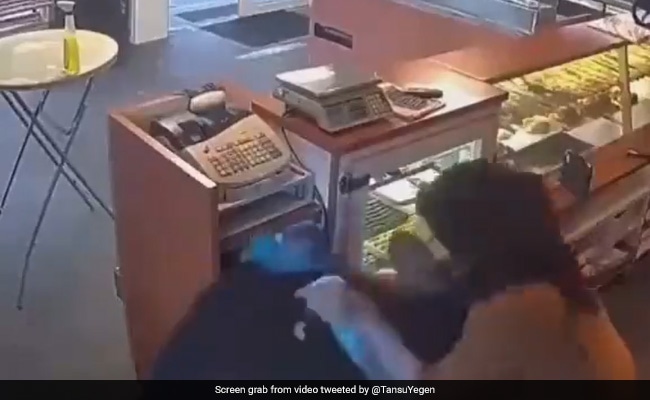 A clip of a woman defending herself against a thief in a Turkish bakery while holding a cleaning cloth is going viral on the internet. The video has been shared by a user named Tansu Yegen on Twitter.

Latife Peker, a turkish baker in the Netherlands, chased the thief, using a cleaning cloth in self-defense; don’t underestimate the power of cleaning cloth???? pic.twitter.com/4togC4JH5M

The clip starts with a robber entering the store while the woman was cleaning it with a cloth in her hand. He was wearing a black hoodie and armed with a knife. The woman is seen attacking the thief with just a cleaning cloth and cleaning spray as the robber attempts to attack the cash counter upon entering the store.

The robber tries to hide his face as the woman strikes him on the head. Another man rushes to apprehend the thief as soon as he spots the theft in progress. The black hoodie man manages to escape his grasp, though, and manages to escape.

The footage has received over 1.3 lakh views and more than 3,000 likes since being shared on Twitter on Friday.

One user asked and wrote, “Is that a spatula in his hand?” while another said, “Long live Turkish bakery.”

Recently an incident went viral from Greater Noida where a traffic police officer chased down a thief fleeing with a woman’s purse for roughly one kilometre on foot.

The thief took the woman’s purse while she was waiting at the busy Surajpur roundabout. She immediately raised an alarm.

Constable Ashish Kumar received praise from both the woman and social media users, who praised him for his dedication and physical fitness.