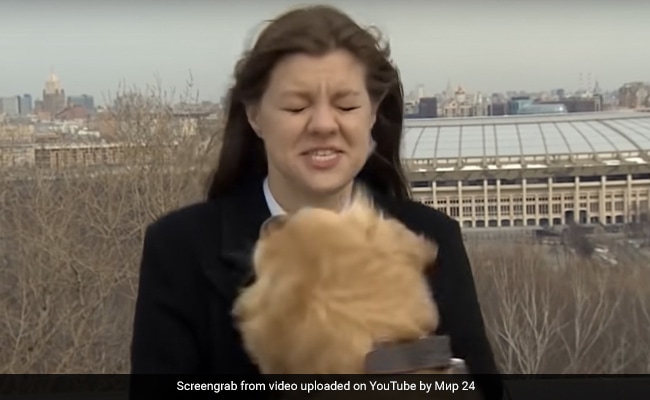 Live TV reporting can be unpredictable. Your work could be interrupted by bad weather, noisy birds or even loud crowds. But this Russian journalist had no clue that her weather report was going to get a very special guest — the cutest Labrador Retriever ever.

In a video that is viral, Mir TV weather reporter Nadezhda Serezhkina can be seen beginning a segment with the exciting news that spring was finally arriving in Moscow, Daily Mail reported. Just as Serezhkina began by saying, “Spring has arrived in Moscow, the temperature will be 8 degrees Celsius, nine degrees Celsius…,” a dog decided it was time for some fun and jumped at her. Grabbing the handheld microphone, the cheeky pooch made a quick gateway.

Serezhkina soon chased after the dog, shouting “Stop, stop, come here.” Serezhkina’s colleague in the studio, Elina Dashkueva, was clearly taken aback by what happened but stifled a smile to quickly explain to the audience that “given all this” the connection was lost.

The adorable Retriever made a second appearance, this time with Serezhkina by his side. With the microphone firmly in hand, Serezhkina completed her bit on the weather, adding that it was the perfect time to walk one’s dog. Might we add that the canine looked extremely content with his little escapade.

Sitting next to the dog, the reporter said “no-one was injured”, but added that the microphone had taken “a bite or two”. She ended the segment by shaking the dog’s paw. Befitting, since there was no doubt he was the real star of the show.