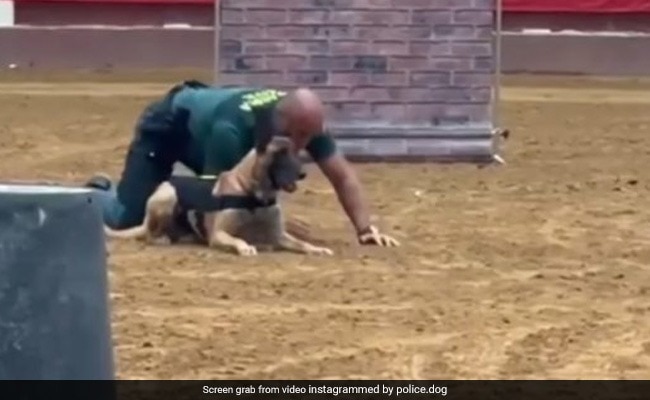 Dog has impressed both the stadium audience and those watching the video online.

Dogs have been used in security patrols for a long time. Security dogs are specially trained to help police officers. In many countries, these dog units are referred to as K-9, which is a homophone for the word canine. A security dog who is sincerely participating in an active mission with his human partner is the internet’s new heartthrob.

A video that has gone viral on the Internet shows a security dog from a K-9 unit demonstrating his exceptional skills and attentiveness. The video shows a mock drill for an attack scenario in which a K-9 dog is seen participating alongside its handler.

The dog moves slowly with its trainer, hiding behind the two security guards, and after a look from the handler, the dog begins running towards a suspicious vehicle. He then jumps right into the vehicle and finishes the job. The dog’s attentiveness and energy capture the hearts of the audience in the open stadium.

This brilliant security dog has impressed both the stadium audience and those watching the video online.

The video quickly drew the attention of social media users and went viral. The video had over 72,000 views and 11,190 likes on Instagram within a few hours. Social media users flooded the comment section with heart emojis, completely enamoured with the dog’s alertness.

“Wow … My dad was a dog handler in the UK about 30 years ago, and we had GSDs. He loved the Malinois, but they hadn’t started using them yet. Amazing dogs,” said a user.

Another person commented, “Thank you so very much for all your amazing service.”

“Wow, these working dogs are amazing,” wrote the third user.