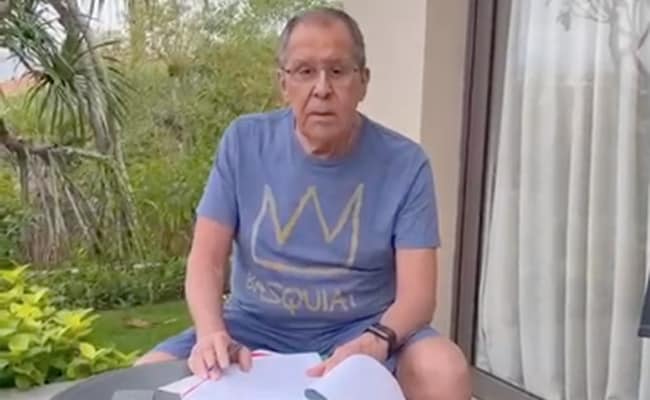 In the video, Mr Lavrov can be seen sitting at a table outdoors wearing a t-shirt and shorts.

Russia’s foreign minister Sergey Lavrov has hit back at media reports claiming he was hospitalised after arriving at Bali for the G20 summit in Indonesia.

In a video shared by foreign ministry spokeswoman Maria Zakharova on Telegram, Mr Lavrov can be seen sitting at a table outdoors wearing a t-shirt and shorts when she asks him about the media reports of him being hospitalised.

“Well, they have been claiming that our president is sick for some 10 years. It is all a game, which is nothing new in politics. I wish the Western journalists were more honest than they are and write the truth a little more often,” Lavrov says in the clip.

The two also share a laugh as Ms Zakhrova asks him about the G20 meeting. Referring to the stack of papers infront of him, she asks if he was preparing for the summit.

“Of course, I have to make a few speeches and we are to adopt a final declaration. The foreign minister of Indonesia has just called. She chairs the ministerial meeting. Talks are being finalised.

Sergey Lavrv is representing Moscow at the summit in Indonesia on behalf of Russian President Vladimir Putin after the latter chose to stay away from the leader’s meet.

Several media reports had stated that Mr. Lavrov had been taken to hospital two days in a row after arriving on the resort island of Bali on Sunday