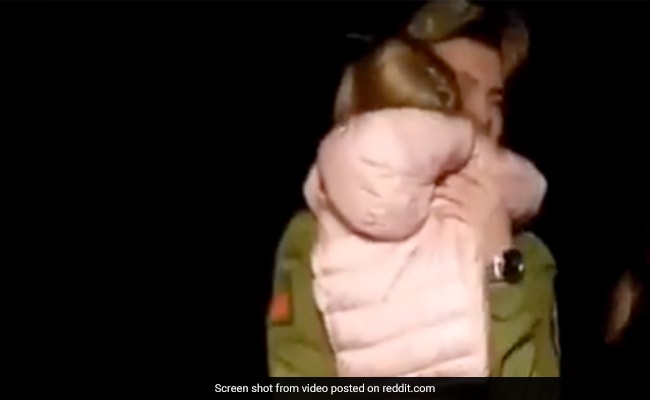 As a result of the Russia-Ukraine war, hundreds of Ukrainian families have endured months of escalating devastation and displacement. Families have been separated and thousands of Ukrainian soldiers had to say goodbye to their folks as they headed out for deployments. Recently, a Ukrainian soldier reunited with his little sister after 10 months, and a video of their reunion made the internet emotional.

A Reddit user shared the emotional moment, and wrote, “AFU soldier & his little sister reunite after nearly year apart.” The video shows the young soldier and his little sister sharing a long hug as he picked her up in his arms. The soldier kissed her on the cheek, and the happiness on the little girl’s face was evident. However, the happiness was short-lived as the siblings could only meet for two minutes during a train stop.

A user in the comment section shared the story of their meeting. He wrote, “They’d not seen each other for 10 months, while the brother was away fighting. The little sister’s train was passing through the area where the brother could access – the train was stopping only for a few minutes.”

Nevertheless, the beautiful reunion touched the hearts of many on the social media site. One user wrote, “Such a beautiful moment.” While another commented, “Train stopped for a whole 2 minutes for this hug.”

Meanwhile, the video comes at a time when pro-Moscow forces have abandoned the southern Ukrainian city of Kherson. Pictures and video emerged showing workers tearing down posters expressing love for Russia and replacing them with “Kherson – hero city” and “Compatriots, you are free” slogans. With the liberation of Kherson, many soldiers from the city and nearby villages are also now able to visit their homes and see relatives for the first time since the start of the Russian invasion.

Recently, a Ukrainian mother and son were reunited after their village was liberated from Russia. Vyacheslav Zadorenko, mayor of the Kharkiv suburb Derhachi, shared the emotional moment on Facebook showing the soldier hugging his relieved mother who was overwhelmed with joy.